About Us
Home › About Us

Amnesty International has made a difference in the lives of tens of thousands of individuals, and has contributed to significant changes in international human rights law and in practices and policies of governments all over the world.

Here's just a few examples of the achievements that make us proud to be part of the Amnesty International movement. 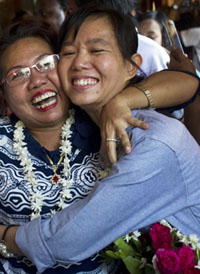 “I thank everyone very much for their support for me and our movement. Receiving letters gives me real inspiration for what we are doing. I have begun to notice that the world is watching and cheering us – we are not alone.”

Amnesty supporters across the world wrote more than 394,000 letters, emails, tweets and more for Phyoe Phyoe Aung during Write for Rights, our global letter-writing marathon.

"I wanted a laptop. I got my father back. Biggest Christmas present ever.....I want to thank Amnesty International from the bottom of my heart."

On International Human Rights Day in 2010, prisoner of conscience Femi Peters in The Gambia was released early from prison.

"I have a big sister. That big sister is Amnesty International and its millions of members. I know if I get in trouble....they'll be there for me."

Jenni Williams, a founder of Women of Zimbabwe Arise (WOZA) whose members are arrested, harassed and beaten for standing up for their rights, has told us many times how letter-writing actions by Amnesty International supporters make it possible for WOZA to keep up the struggle for justice.

In 2010, an Amnesty research mission to Eastern Chad brought the dire reality of refugees from the Darfur conflict to the world's attention.  Amnesty International urged the UN to sustain its mission to protect and provide for the vulnerable people who have been displaced.  They listened and extended the mandate.

In 2012, the first sentence was handed down by the International Criminal Court (ICC). Lubanga Dyilo was found guilty of recruiting child soldiers and using child soldiers in armed conflict.  Amnesty International had championed the Rome Statute that created the ICC, knowing that it is critical to have a means to prosecute international war crimes and crimes against humanity.  With this first verdict, we feel proud to have worked so hard to get this to happen.  A message has been sent to all who would violate children's rights in this way, and victims are now able to seek compensation.