Decades of injustice, oil and violence in the Niger Delta

This is part 2 of 6 of the blog series: 25 years working for human rights in the Niger Delta

In 2005, ten years after executions that horrified the world, the exploitation of oil in the Niger Delta continued to result in deprivation, injustice and violence. Despite a return to civilian government in 1999, those responsible for human rights violations under military governments were not brought to justice. Security forces were still allowed to kill people and raze communities with impunity. The environmental harm to health and livelihoods that impelled the Ogoni campaign for economic and social rights remained the reality for many inhabitants of the Delta region.

Marking the ten year anniversary of the execution of Ken Saro-Wiwa and the Ogoni Nine, Amnesty International issued a report titled “Claiming rights and resources: Injustice, oil and violence in Nigeria".  The Niger Delta’s marginalized communities continued to vigorously campaign for their rights. But human rights defenders and journalists, including foreign television crews, were harassed, detained and sometimes beaten for investigating oil spills or security forces violations. Protests were put down with excessive force. The federal government rejected calls for independent and impartial inquiries into abuses by these forces, which operate under its direct control.

After one protest, a community spokesperson told Amnesty:  “People from the community fled in panic on the day of the raid. Some tried to cross the water to the other side but drowned since they could not swim.”

While the Nigerian government continued to reap huge profits, the inhabitants of the Niger Delta remained among the most deprived communities in the world — the majority living on less than US$1 a day, the standard economic measure of absolute poverty.

As Eghare W.O. Ojhogar, chief of the Ugborodo community said to Amnesty:  “It is like paradise and hell. They have everything. We have nothing… If we protest, they send soldiers. They sign agreements with us and then ignore us. We have graduates going hungry, without jobs. And they bring people from Lagos to work here.” 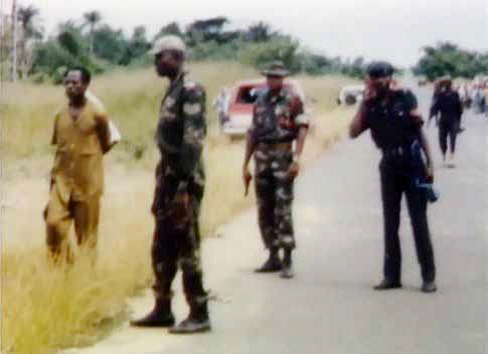 Amnesty International urged the Nigerian federal government to urgently conduct thorough and independent inquiries into allegations that the security forces killed, injured or attacked in multiple incidents, underscoring that those guilty of crimes must be brought to justice.

If you missed it, here is Part 1 of this blog series - Oil and Executions in the Niger Delta

Go to Part 3 of blog series.