by Craig Benjamin and Jackie Hansen

A new report describes the devastating impact that decades of hydroelectric development have had for First Nations in north-eastern Manitoba, including allegations of sexual assault and other violence by workers brought into the communities to build the dams.

The publication of this report underlines just how important it is that the voices of Indigenous peoples – especially Indigenous women – are heard and listened to when decisions are made about large dams and other resource development projects.

The report by the Manitoba Clean Environment Commission, released this week,  was done as a follow-up to a previous cumulative impact study conducted by the provincial government and Manitoba Hydro. That previous study had included only limited opportunities for public engagement. For the follow-up report, commissioners met with affected First Nations and heard powerful testimony that had been excluded in the original report.

As summarized in the new report, the impact of hydro development in northern Manitoba included the devastation of hunting and fishing traditions and the further economic marginalization of First Nations amid the wealth being generated for the benefit of others.

Community members from Makeso Sakahikan Inninuwak (Fox Lake Cree Nation) described acts of violence and harassment by many workers among the thousands who were brought into their communities – and the frequent failure of police and other authorities to act on and prevent these crimes.

The harm experienced by these communities was so profound that an elder from Fox Lake Cree Nation compared the devastating impacts of hydro development to residential schools.

The testimony in this new report is deeply troubling. But it is also not surprising.

The patterns of cultural loss, economic marginalization and violence described in this report directly parallel the findings of Amnesty’s major research project Out of Sight, Out of Mind: Gender, Indigenous rights, and energy development in northeast British Columbia, Canada.

Indigenous women, girls and two-spirited people face extraordinarily high levels of violence in Canadian society, whether in remote northern communities or the downtowns of our largest cities. Government and police have yet to come to terms with the pervasiveness and severity of this violence.

Despite decades of advocacy by Indigenous women’s organizations, and numerous reports -- including detailed reports by international human rights bodies -- there is still no coordinated national plan of action to prevent violence, help Indigenous women, girls and two-spirited people escape situations of violence, or ensure that all such acts of violence are fully and properly investigated.

In this context, current models of large-scale resource development in Canada, particularly in remote communities, can often make this crisis even more acute. 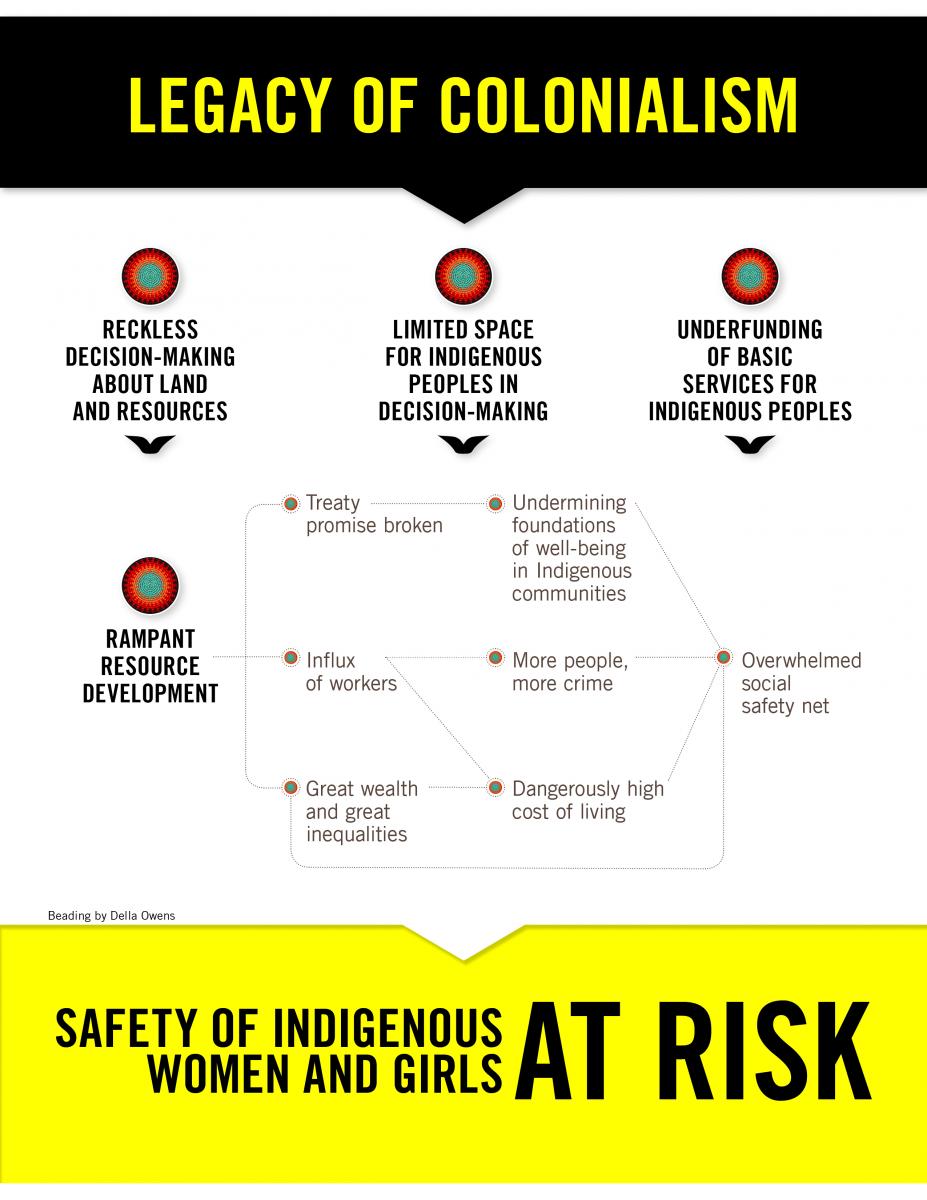 All of these factors are made that worse by being ignored. In our report we quoted Anita Lee of the Fort St. John Friendship Society who said, “Nobody is asking the communities ‘what do you really need?’”

Out of Sight, Out of Mind

As we noted in our report, Indigenous peoples across Canada have also described similar patterns of harm, including in recent reports by the Pauktuutit Inuit Women of Canada and the Lake Babine and Nak’azdli First Nations.

And in fact, decades of government and academic studies have also warned about the potential social and economic harms from projects promoted as necessary for jobs and economic growth.

The problem is that the decision-making processes around resource development projects are rarely set up to identify and address the risks of social and economic harms. The most common form of public engagement in these processes, environmental impact assessments, take a very narrow approach, often ignoring human rights impacts and almost never considering how projects might have different impacts for people of different genders.

Perhaps most critically, affected communities rarely have any real say in the final decisions made by the federal, provincial and territorial governments, despite the rights of Indigenous peoples guaranteed in the Constitution and international law.

The federal government is now moving ahead with new impact legislation that will broaden the scope to include consideration of human rights impacts, including both gender analysis and consideration of long-term cumulative impacts.

Unfortunately, the new legislative fails to include any actual guarantees that the final decision made by government will ensure that the rights of First Nations and community members are upheld.

This further underlines the importance of the standard of free, prior and informed consent [link factsheet] in international law which requires the state to collaborate with Indigenous peoples and, where there are risks of serious human rights impacts, proceed only on the basis of mutual consent.

Testimony from the Manitoba report

The Manitoba report deserves to be widely read and should help inform decision-making processes not only in Manitoba but across Canada. Many passages from the new report are so powerful and telling that they are worth quoting at length.

"The Fox Lake Cree have a history with hydroelectric development that dates back over half a century. Aside from the flooding that other northern Indigenous communities experienced as a result of hydroelectric development, he said, the Fox Lake home community of Gillam was taken from them and redeveloped to Manitoba Hydro’s corporate needs. Prior to the arrival of Manitoba Hydro, [a Fox Lake Cree elder] said, the Fox Lake Cree Nation had been able to adapt to the various changes in the northern economy. He cited from various reports that indicated that the community had been swamped and shattered by the arrival of 4,000 workers. He—and other people who spoke at the presentation—referred to the consequential social breakdown as a Hydro-triggered atrocity.  Following this presentation, three groups of community members—Elders, adults, and youth—spoke of the impact that development had had on them and their community.

Several of the Elders described the pre- development community as being one where people felt a sense of mutual responsibility. They cared for children, built homes, harvested resources, and cooked meals together. They also supported each other in times of crisis. One woman spoke of how she used to help her father chop wood and haul it by dogsled. The Nelson River constituted a major transportation route and a source of clean water, and the land was a source of medicinal plants.

They spoke of how the transformation  of Gillam, from a small rail town with a population of a few hundred people to a major Manitoba Hydro construction and service centre with a population of several thousand, was swift and dramatic. Indigenous people living in the community found themselves categorized as squatters. Their homes were destroyed to make way for trailer courts and homes of senior Hydro officials. Local game and fish were dramatically reduced by Hydro workers engaged in recreational hunting and fishing. Another elder said that, over time, most of the trap line rights came to be held by Hydro employees.

People felt marginalized and discriminated against: they recalled being termed “dirty Indians” and “wagon burners” at school. Indigenous children felt excluded from the new amenities such as the recreation centre and subjected to harsh discipline at school. Adults and children felt helpless, ashamed, and threatened: some felt compelled to fight back.

The arrival of a largely male construction workforce led to the sexual abuse of Indigenous women: people spoke of construction workers getting them inebriated and then taking advantage of them. People spoke of witnessing rape and being unable to interfere. Some spoke of instances of institutions intended to protect people, particularly the Royal Canadian Mounted Police, brutalizing men, permitting the exploitation of women, and failing to take local complaints seriously, although there were also instances of these complaints being addressed. Indigenous children felt themselves to be the target of racial violence and discrimination. The nature of other institutions was transformed: Indigenous people found they now constituted a small minority of church congregations, where, in the past, they had formed the core of the membership. …

Hydro development transformed the landscape. People spoke of how, prior to development, the Nelson River was a major transport route; now it is disrupted by the presence of Hydro dams. Forested areas have been cleared to make way for construction sites and transmission lines. Access to the land became, and remained, limited as Hydro consumed ever greater portions of the landscape.

Drugs, alcohol, community violence, and suicide remain problems. Economic and educational opportunities are limited in the Cree community of Bird.

Those who continue to harvest natural resources face numerous problems: disturbances mean that they have to travel further to find game and to trap furbearing animals. People are also worried about the potential health hazards of eating sh. The cost of living in the North remains high. People wondered why electricity was so expensive when the hydroelectric dams were in their own backyard."

"One of the messages that community members delivered was that the interests, opinions, and knowledge of the community members had been ignored throughout the entire period of the development of the hydroelectric potential of the region...

People also spoke  of being offended by Manitoba Hydro’s marketing of hydroelectricity as being clean and green. It is, they suggested, power from dirty water. An underlying message from the meeting was the lack of social justice; people felt a community had been destroyed and a lifestyle lost in order to enrich people who lived elsewhere."