Right now, record numbers of people worldwide have been forced to flee their homes. But instead of protecting refugees; out of fear and prejudice, many of the wealthiest nations are slamming their doors shut and leaving a handful of countries to cope alone. Effective protection for refugees requires international cooperation.
Each country must take responsibility to uphold international obligations and provide asylum and protection to refugees. At an individual level the solution to the global refugee crisis starts with each and every one of us making one simple, personal commitment to help – simply by saying: “I welcome refugees”.

Urge Canada to protect refugees affected by US policies

2015 was record-breaking in terms of forced displacement
By the end of 2015, 65.3 million individuals were forcibly displaced worldwide (including refugees and internally displaced people) as a result of conflict, persecution, generalized violence and human rights violations. The number of refugees increased to 21.3 million, of which 16.1 million are under UNHCR’s mandate. Available data shows that women and girls made up approximately 49 percent of the refugee population in 2014 .

The international community’s response has been grossly inadequate
Wealthy states and the international community as a whole have failed to equitably share responsibility for managing the ongoing global refugee crisis. Currently, such responsibility lies disproportionately with poorer countries: 86 percent of the world’s refugees are in developing regions and in 2015 Least Developed Countries (LDCs) were hosting 4.2 million refugees, or 26 percent of the global total. UNHCR estimates global resettlement needs to be over 1.19 million, yet global resettlement commitments are just over 100,000 per year with only 30 countries offering resettlement places  . Moreover, wealthier countries are not doing nearly enough to share the financial burden for the global refugee crisis, with humanitarian appeals for refugees consistently – and often severely – underfunded.

Refugees continue to risk their lives to seek international protection
Refugees and asylum-seekers are forced to contend with dangerous sea and land crossings, increased border closures, pushbacks, and abuses, extortion and violence by law enforcement officials, criminal gangs, smugglers and human traffickers. During transit women and girls are at high risk of sexual and gender-based violence. In transit from Northern Triangle of Central America (NTCA) countries towards Mexico and the United States, women and girls are at significant risk of sexual violence – 60% are raped on route  – and of sexual exploitation and other forms of violence.

The global refugee crisis has lef to a security driven response, rather than focusing as a catalyst for a human rights based response
Globally, states continued to prioritise deterrence policies and measures to block the movement of refugees and asylum-seekers, while putting the onus on states located in the immediate region of displacement or on its peripheries to assume responsibility for protection. An increased prioritization of security concerns over the human rights of refugees, also led to a notable increase in obstacles faced by refugees and asylum-seekers to seek and enjoy protection. 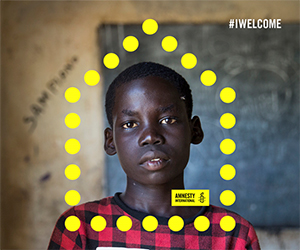 Many countries have acknowledged that current responses to refugees are not working.

Amnesty will use this global campaign to call for all states to equitably share responsibility to resettle all refugees who meet UNHCR’s vulnerability criteria and provide other safe and legal routes for refugees to find protection.

Amnesty International will also call on more countries to put in place systems and processes that guarantee access to fair asylum processes and to ensure that there are fewer abuses committed against migrants and refugees in their search for safety.