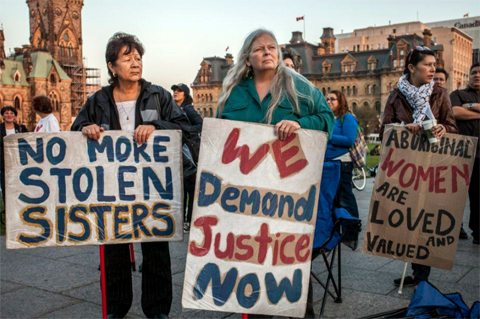 What solutions are needed to stop the violence?

A comprehensive national response to end violence against Indigenous women and girls should include:

In December 2015, the government of Canada launched the design phase for the National Inquiry into Missing and Murdered Indigenous Women and Girls in Canada. The inquiry is expected to commence in mid-2016. Amnesty International welcomes the announcement of the inquiry and calls on the federal government to ensure the inquiry is truly national in scope and can:

A national action plan on violence against women must accompany the national public inquiry into missing and murdered Indigenous women and girls.

Amnesty International has long called for a comprehensive, coordinated national plan of action to address gaps in current policies, programs and services; involve Indigenous women’s organizations in identifying the necessary solutions; and ensure accountability in their delivery.

Amnesty International has long called for systematic, publicly available data on the Aboriginal identity of both the victims and perpetrators of violence. Such data can be crucial to better understand and eliminate violence. Canadians need accurate and comprehensive statistics on missing and murdered Indigenous women and girls to ensure that the rights steps are being taken to address threats and ensure the safety of all women and girls.

In May 2014 the RCMP released the first federal statistics on how many Indigenous women and girls have gone missing or been murdered. At the time, Amnesty International expressed concern about the accuracy of the data, and maintains that the true number is likely far higher. In February 2016, federal cabinet ministers acknowledged that the true number of Indigenous women and girls whose lives have been stolen is likely far higher than reported by the RCMP.

Law enforcement has a vital role to play in ending violence against Indigenous women and girls. They are responsible for instituting procotols and training officers in how to investigate allegations of violence, as well as suspected missing persons and homicide cases, with the ultimate goal of providing protection to every person in Canada. Yet numerous studies of policing in Canada have concluded that Indigenous people as a whole are not getting the protection they deserve. If police are to provide Indigenous people with a standard of protection equivalent to that provided to other sectors of society, police need to understand the specific needs of Indigenous communities, be able to communicate with Indigenous people without barriers of fear and mistrust, and ultimately be accountable to Indigenous communities. As some police officers acknowledged to Amnesty International, this is clearly not the case today.