Since May 2018, authorities in Saudi Arabia have arrested some of the country’s most prominent women human rights defenders. These courageous activists have peacefully advocated for the right of women to drive, an end to the male guardianship system, and for justice and equality. They were charged with bogus offenses. Many were convicted. All have now been conditionally released from prison but prevented them from continuing their activism or traveling outside Saudi Arabia.

Amnesty International firmly opposes all forms of Islamophobia and condemns any and all acts of white supremacist racism and violence against Muslim communities.

What is the latest update on the situation?

Many of these women led a multi-year campaign to lift the driving ban on women. The ban was lifted in June 2018, but not all the women who made it happen have had the opportunity to legally sit behind the wheel. Instead some remain behind bars, locked up in prison cells.

The wave of arrests didn’t end there. In July 2018, Saudi authorities arrested Samar Badawi and Nassima al-Sada, also prominent women activists. Nassima and Samar have spent lengthy periods of time since their arrests in solitary confinement.

Several of the women activists endured torture, sexual abuse and other forms of ill-treatment. Some have been held for long periods of time incommunicado, with no access to their families or lawyers.

On March 13, 2019, Loujain was among 11 women activists brought to trial before the Criminal Court in Riyadh. The court session was closed and diplomats and journalists were banned from attending. Several women activists face charges of contacting foreign media, other activists and international organizations including Amnesty International. Some of them were also accused of “promoting women’s rights” and “calling for the end of the male guardianship system.”

Following the court session, many of the activists were temporarily and provisionally released. However, they continue to face trial and remain at risk of being sentenced to prison terms. Releasing these women from detention is not enough, Saudi authorities must drop all charges against them.

Nassima and Samar were brought to trial before the Criminal Court in Riyadh in July 2019, after a year of arbitrary detention, and remain in detention.

In November 2020, Saudi Arabia hosted the G20 Leaders' Summit. Activists from around the world used the Summit as a moment to call for the women human rights defenders to be released.

On November 25, 2020, just days after the G20 Leaders' Summit ended, Loujain's court hearings re-started and her case was moved to the Specialized Criminal Court (anti-terrorism court).

On December 28, 2020, Loujain al-Hathoul was convicted of terrorism-related offences and sentenced to five years and eight months in prison. She was released from prison on February 10, 2021. Loujain has been released, but she is not free. She is subject to three years probation which prevents her from continuing her activism. She is banned from travel outside Saudi Arabia for five years. She appealed her conviction and remains on trial while her appeal is heard by the court. Loujain may have been released from prison, but she is far from free.

On June 27, Samar Badawi and Nassima al-Sada were released from prison.

While all of the women human rights defenders have been released from prison, many were convicted on bogus charged. None are free to continue their activism or travel outside Saudi Arabia. No one has been brought to account for their allegations of torture and other ill treatment.

In August 2019, Saudi Arabian newspapers announced major reforms to several laws easing some of the major restrictions which are imposed on women as part of the country’s repressive male guardianship system. The reforms will allow women the right to obtain a passport that should make it possible for them to travel without the permission of a male guardian. They also give women equal rights to lead household and some family-related matters. Saudi Arabia must follow up on crucial reforms announced today to address women’s rights by ending its persecution of women human rights defenders and immediately and unconditionally releasing those who are currently detained for their peaceful activism.

Who are the women human rights activists detained in Saudi Arabia? 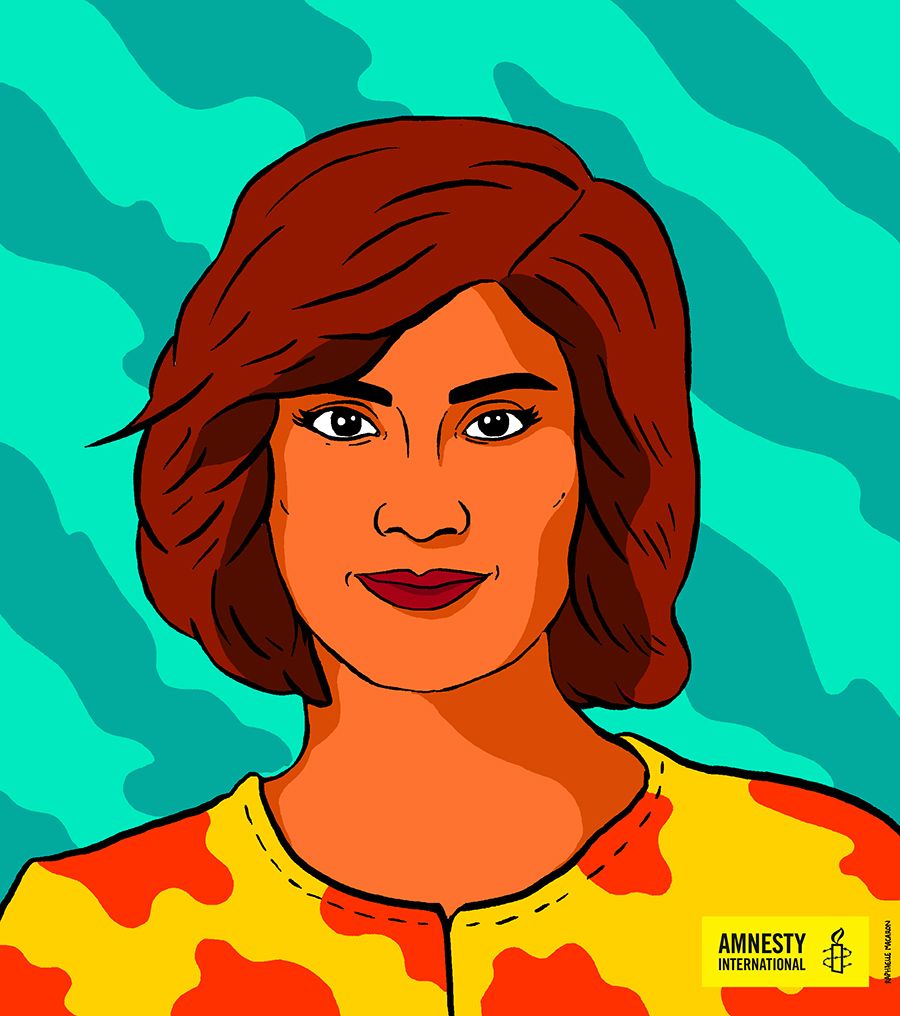 Loujain al-Hathloul one of the most outspoken women human rights defenders in Saudi Arabia. In 2014, she graduated from the University of British Columbia in Vancouver with a degree in French. She is well-known for her campaigning against the driving ban and the campaign to end the male guardianship system. In 2014, she was detained for 73 days after she attempted to drive into Saudi Arabia from the United Arab Emirates. Loujain al-Hathloul also went on to stand for election in Saudi Arabia in November 2015 – the first time women were allowed to both vote and stand in elections in the state. However, despite finally being recognized as a candidate, her name was never added to the ballot. Click here for updates on Loujain's case. 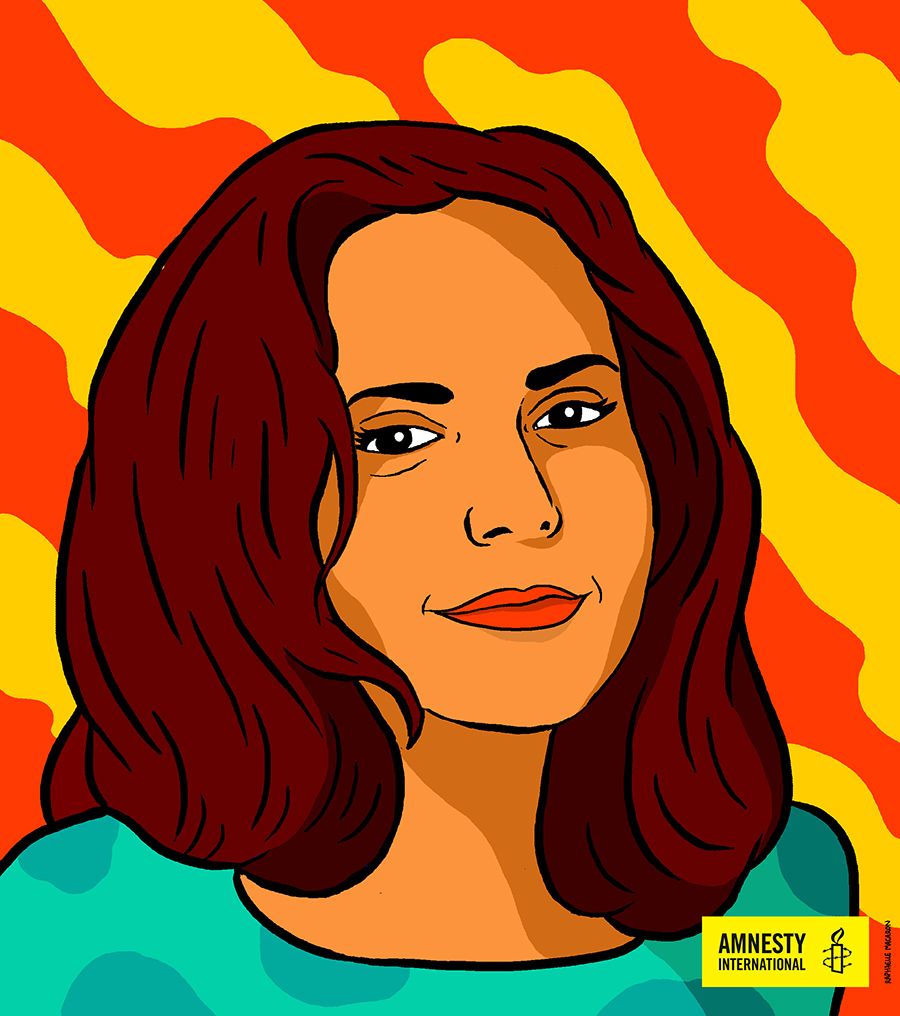 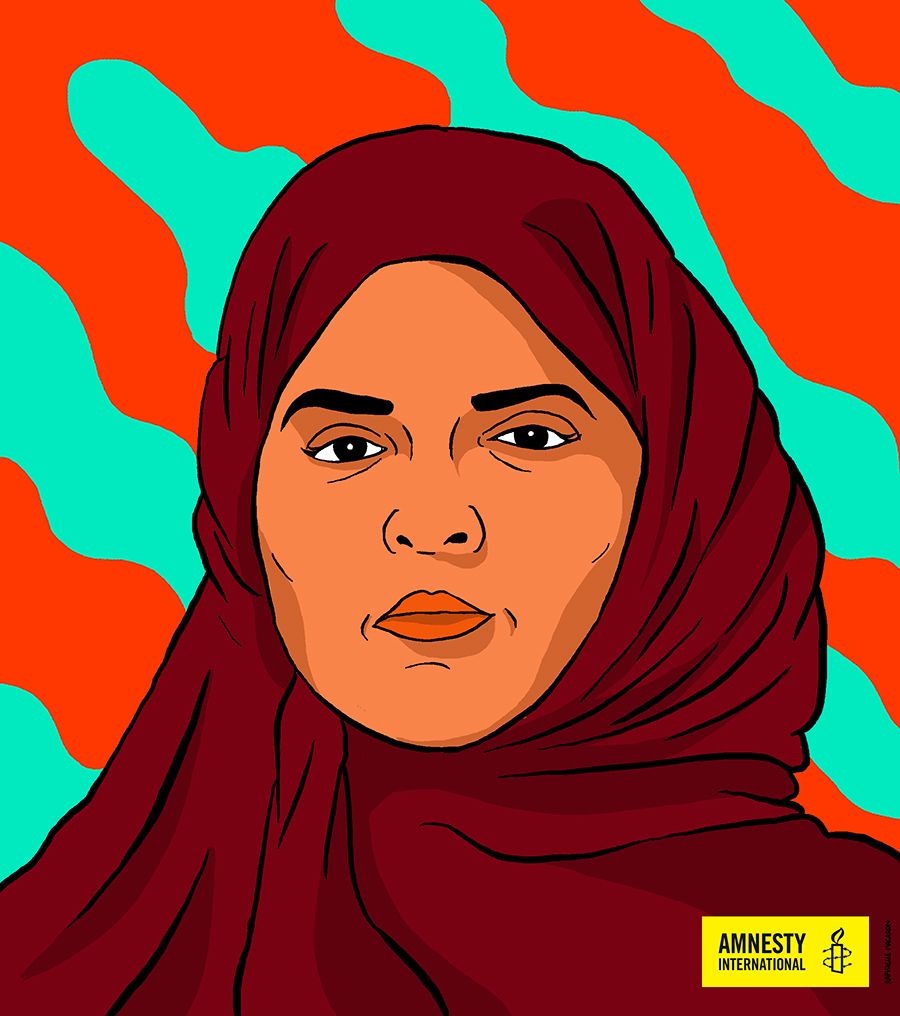 Aziza al-Youssef is an activist, retired professor, mother of five, and grandmother of eight. She is a prominent women’s rights activist who has been working tirelessly to support women’s rights in Saudi Arabia. She repeatedly defied country’s driving ban, and has been harassed and interrogated for her human rights work. In 2016, she delivered a petition signed by 15,000 people to the royal court, demanding an end to the male guardianship system. 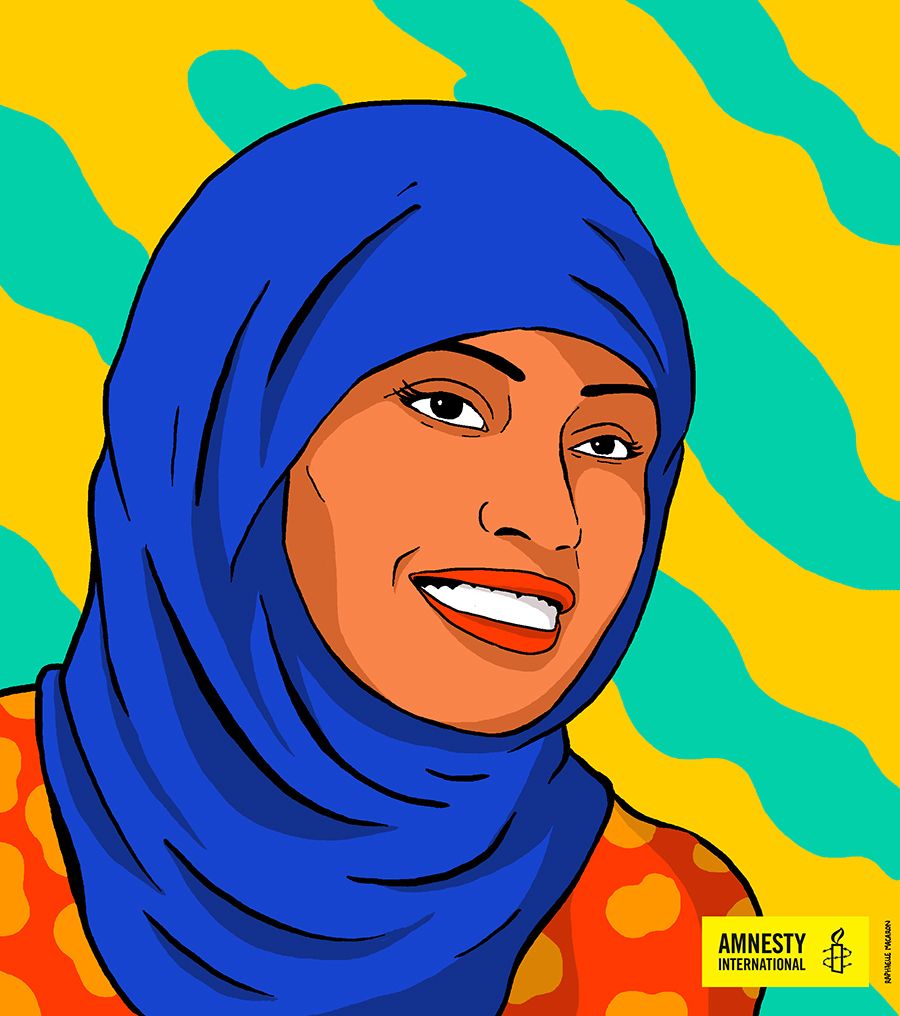 Samar Badawi is an activist and mother of two. She has been repeatedly targeted and interrogated by the Saudi Arabian authorities for her human rights activism. In 2014, she was subjected to a travel ban and was arrested in 2016 for her human rights work. She is the sister of imprisoned blogger Raif Badawi, who was sentenced to 10 years in prison and 1,000 lashes for setting up a website for public debate. Raif’s wife and children are Canadian citizens and live in Quebec. 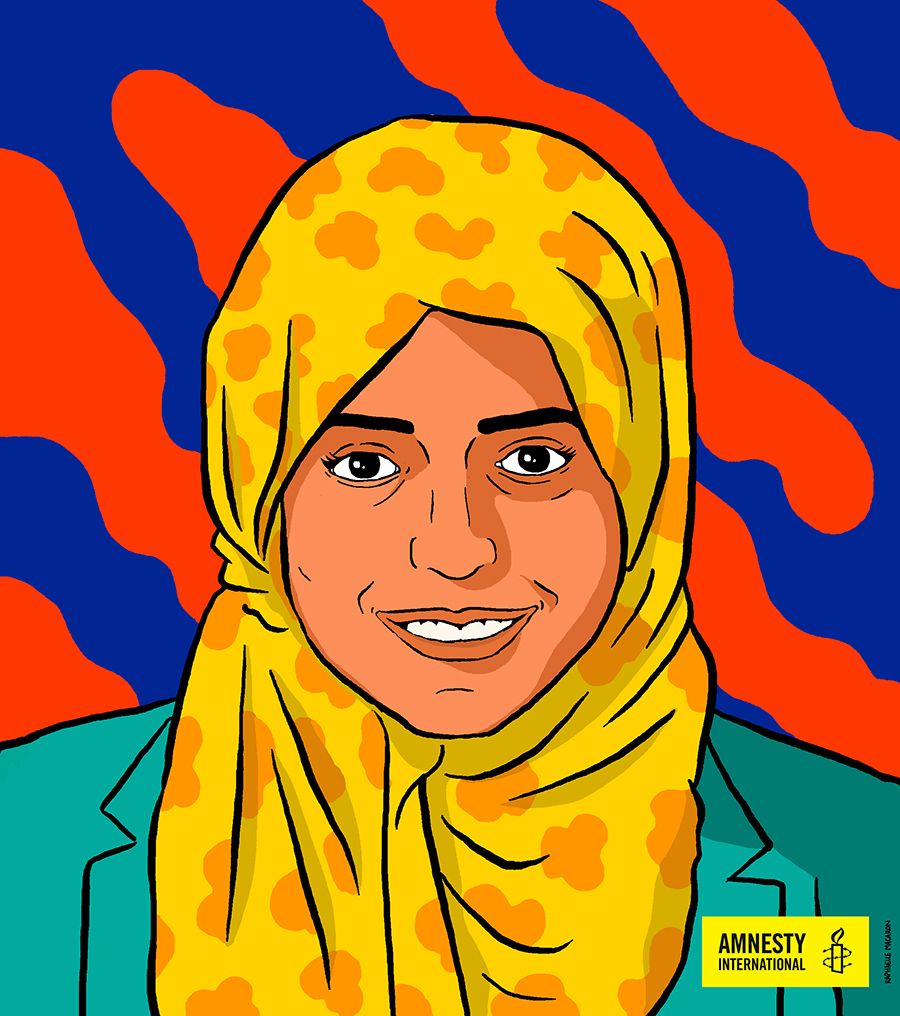 Nassima al-Sada is an activist, human rights educator. and mother of three. She has campaigned for civil and political rights, women’s rights, and the rights of the Shi’a minority in the Eastern Province of Saudi Arabia for many years. She stood in municipal elections in 2015, but was banned from participating. She has also campaigned for the right of women to drive and for the end of male guardianship system.

Why are women human rights defenders being targeted?

The space for civil society to peacefully advocate for human rights is shrinking all around the world, and that includes in Saudi Arabia. People who advocate for freedom, justice, and equality in countries including Saudi Arabia often do so in an environment where they are demonized and restricted in their work. Many human rights defenders are smeared, threatened, physically attacked, criminalized and sometimes even killed, just for daring to stand up to those in power.

The threats to women human rights defenders are compounded because they are targeted both for who they are and what they’re advocating for.

In most parts of the world, including Saudi Arabia, women are considered less worthy because of their gender, or because they work on issues related to gender and sexuality. They’re more likely to be seen as not fitting in with social norms and expectations. They’re at greater risk of violence, sexual attacks, and harassment. They’re all too often the target of sexualized smears and of being judged by the value of their “honour” when they speak out.

Women human rights defenders are often ignored, dismissed, and silenced. Their extremely courageous, cutting-edge work continues to be underrepresented and insufficiently recognized by mainstream society, policy-makers, and the media.

Women human rights defenders need special recognition of their work, a safe space to work in, and specific protection to meet their needs.

Loujain, Iman, Aziza, Samar, and Nassima are incredibly courageous. Without special recognition of their work, a safe environment, or sufficient protection, they have spoken out in support of gender equality in a country that up until June 2018 was the only country in the world to forbid women from driving. In a country where patriarchal systems of oppression are firmly in place, these women have stepped outside of traditional gender norms and national laws to advocate for justice and equality. And for this, they have been criminalized. In many countries, women human rights defenders are arrested, detained, charged with offenses, and tortured to silence their voices, and to deter other activists from publicly speaking out.

Why do governments carry out smear campaigns against women human rights defenders?

This sort of public smear campaign conducted against the women human rights defenders in Saudi Arabia is a tactic often used by governments in an effort to discredit activists and silence dissent.

Stigmatization and smear campaigns are commonly used by many countries to delegitimize human rights defenders and undermine their work. Typically, authorities and others in power make statements tarnishing their reputations. HRDs may be publicly (and falsely) accused of – among other things – being terrorists (often facilitated by excessively broad legislation), defenders of criminals, unpatriotic, corrupt, “foreign agents”, “fifth column” spies, “enemies of the state” or of “picking quarrels and provoking trouble” and opposing national or moral values. In highly polarized societies, stigmatization can have the effect of inciting government sympathizers against human rights defenders, putting them at further risk, even of physical attacks and killings, at the hands of pro-government armed groups or other non-state actors, for example. Learn more here.

What is the broader context in which the persecution of women human rights defenders is occurring?

The arrest of women human rights defenders is part of a broader crackdown in Saudi Arabia on freedom of expression, association, and assembly. Crown Prince Mohammad bin Salman continues to promote his ‘reforms’ to the international public, while silencing anyone at home who dares to question his policies.

Can we have an impact?

In 2015, jailed Saudi blogger Raif Badawi was publicly flogged. Public outcry—including concerted campaigning by Amnesty International—drew international attention to his case. Raif has not been flogged since.

Saudi officials monitor social media and are sensitive to international pressure. This is why Amnesty International’s actions directly target the Royal Embassy of Saudi Arabia in Ottawa and official Saudi government social media feeds to:

What can I do?

Where can I find more information on this topic?

Saudi Arabia: Women's rights reforms must be followed by release of detained activists

Saudi Arabia: 10 things you need to know about a kingdom of cruelty

The Canada/Saudi Diplomatic Spat: It’s all about human rights

Driving ban and the Women2Drive movement